Resident Evil: Umbrella's Conspiracy is set right after the effents that occured in Resident Evil. After surviving the horror from the Spencer Mansion, Jill rides home in her helicopter, but something disasterous happens. A cyclone is unravelling and Barry falls out of the helicopter. Jill must decide to go back through the horror for the life of her fellow comrade.

As Jill continues her story, she must now go back into the danger which has been thrusted upon her. As you fill in the event gaps between Resident Evil 1 and Resident Evil 3 you will discover more than you ever knew about Umbrella and the conspiracy they had played to cover up any evidence that a plague destroyed the city.

Jill Valentine http://i10.photobucket.com/albums/a117/DirtyDerek/REUC%20Characters/Jill.png
An intelligent solider that has saved many S.T.A.R.S. members from danger in the past, Jill was reassigned to Raccoon City just like Chris. One of the survivors of the original incident that occurred in the mansion in the Arclay Mountains, she was able to flee Raccoon City in Resident Evil 3 Nemesis.
Chris Redfield http://i10.photobucket.com/albums/a117/DirtyDerek/REUC%20Characters/Chris.png
A member of the S.T.A.R.S. Alpha team. After being kicked out of the Air Force, Chris became a drifter until he met Barry Burton. Barry recruited him for S.T.A.R.S and then got him reassigned to a smaller unit at Raccoon City headquarters to prove himself quickly. After he escaped the mansion with Jill, Rebecca and Barry in Resident Evil, he rescued his sister Claire from Antarctica in Resident Evil Code: Veronica.
Rebecca Chambers http://i10.photobucket.com/albums/a117/DirtyDerek/REUC%20Characters/Rebecca.png
The youngest member of the group, Rebecca has been recruited for her knowledge of field medicine and First Aid. She is nervous around other members, both because of her age and due to her lack of experience. Rebecca is eager to please and will take on any task assigned to her without hesitation.
Albert Wesker http://i10.photobucket.com/albums/a117/DirtyDerek/REUC%20Characters/Wesker.png
Wesker excelled inside the S.T.A.R.S. organization and led the Alpha Team in Resident Evil. Viewed by many as a “cool guy,”, Wesker was recruited by a headhunter for his sharp insight. Although he founded the S.T.A.R.S. unit in Raccoon City, he was really spying on Umbrella. He was nearly killed by Tyrant and injected himself with the T-virus which made him all-powerful. In Resident Evil Code: Veronica X, he escaped the destruction and now remains at large.
Barry Burton http://i10.photobucket.com/albums/a117/DirtyDerek/REUC%20Characters/Barry.png
Barry is a former SWAT team member with more than 16 years of experience. Regarded as one of S.T.A.R.S. most exceptional members, he is a highly skilled weapons expert and supplies and maintains weapons for the underground organization. Barry is very much a family man with strong values. Past experiences have made him wary of others. 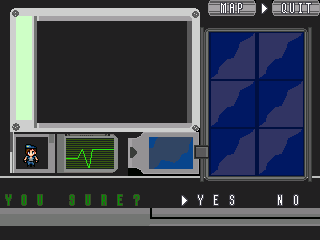 Christophomicus For installing and teaching me the ways of RPG Maker.

Bah, I had this idea ages ago. I think it would be cool to release a full mp3 soundtrack like all other Resident Evil games. I really don't expect anyone to download it, but It's just a habbit that I should get into with releasing later games.

- Will update this greatly later.

Apparently, for the first game made by me, bloody awesome.

Retrieved from "https://rpgmaker.fandom.com/wiki/Resident_Evil:_Umbrella%27s_Conspiracy?oldid=16366"
Community content is available under CC-BY-SA unless otherwise noted.