Sim RPG Maker is a tactical role-playing game maker and part of the long-running RPG Maker series, although the name is not a direct translation of the original program.

There have been two versions of Sim RPG Maker. The first was a console version released on September 17, 1998 for the Sega Saturn, the second for the Sony Playstation in Japan only by ASCII. A Windows version, also by ASCII, was released on May 29, 1998 in Japan only. This version was translated to English and distributed via the internet under the name, Sim RPG Maker 95.

Games created with this Sim RPG Maker are focused around strategic battles in which players move their units (battle characters) on a graphical field, separate the units, and use the units to attack. [1] This style of game is classified as a tactical RPG similar to Final Fantasy Tactics, Fire Emblem, and Ogre Battle.

A game typically involves several maps, each with a starting event or cutscene, the main battle, and an ending cutscene. In between maps, players can be sent to the camp, where they may purchase items, switch out party members, change equipment, or check stats of characters. Maps can be designed with different objectives in mind. The most common objective is defeating all enemies or a specific boss character. In addition, players may have to survive a set number of rounds, move past a specified location, or prevent specified characters from dying. Some maps may even be used strictly for cutscenes, with no battles taking place. Maps are progressed through linearly, but it is possible to send the player to maps out of order, enabling multiple/alternate storyline forks. It is also possible to send the player to a previous map.

A screenshot showing the editor and a typical map. 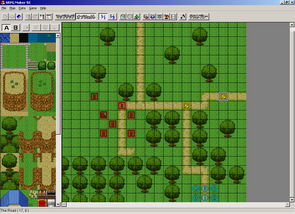 Retrieved from "https://rpgmaker.fandom.com/wiki/Sim_RPG_Maker?oldid=22830"
Community content is available under CC-BY-SA unless otherwise noted.